Eight Gay Cartoons You Grew Up With (and always knew about)

So we had the ladies last week, now it’s the guys’ turn. Call me biased but, while composing the girls’ list was fun from beginning to end, this list made me feel… nostalgic. All these guys mean a lot to me, because I grew up with them. I loved or hated them even before knowing what ‘gay’ meant; and needed no one to out them for me. And most likely, neither did you. Just in case you’ve been living under a rock for the last 60 years (or your gaydar is more useless than mine) here is another arbitrary list of gay cartoon characters. 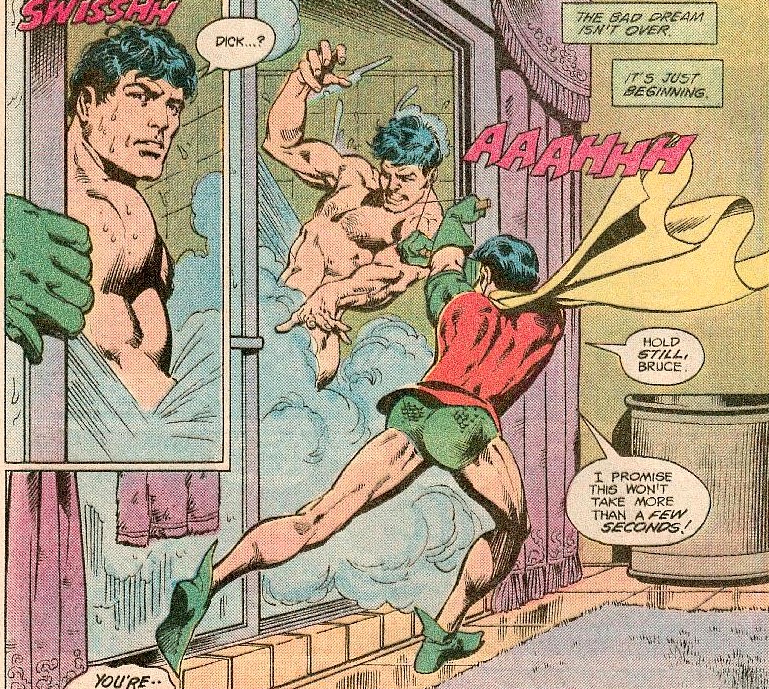 Batgirl? She’s just an annoying third wheel. And as for Catwoman, she makes me blush, she does not count!

Now these two guys are special to me. There’s plenty of ambiguously queer animals, bright-eyed twinks and outrageous queens bouncing around, but these two men raised a family together. I mean, does Mister Rocket Scientist really need a bodyguard/pilot/babysitter/roommate around him 24/7? That sounds like a husband to me. Really, where were the women in this show? They were superfluous to Benton and Race, who happily lived each of their adventures with their little boys and aptly named pup, ‘bandit’. These guys really had it all. Family vacations to Egypt, coordinated outfits, matching pajamas for heavens sake! If you really think about it, Race had a pretty crummy job: the pay could not have been very good, Jonny was a total spaz, and Benton a damsel in distress if there ever was one (kidnapped more times then Peach and Zelda combined). But Race came to the rescue every time, all because he loved his hot and spicy redhead. some guys have all the luck… Prince Adam and Cringer (He-Man and the Masters of the Universe) 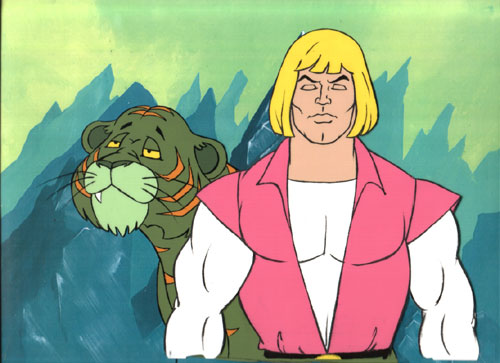 Speaking of queens, here are the most outrageous of them all. Now I was never really much of a He-Man fan. Usually I would just catch the last five minutes of the show while I waited for She-Ra to begin (He-Man’s equally queer and fabulous sister, except she hung out with mermaids, fairies and unicorns, so, naturally, I was a fan). He-Man, 6’3 and 280 pounds of blonde muscle, was just too queeny for my taste, and that should tell you something. But the guy was just happy running around in a fauxfur jockstrap wrestling other skimpily clothed men. His tiger, Cringer, was an even bigger diva; I’m talking cowardly lion after pride weekend in WeHo. Now, now, I know that superheroes often opt for skimpy and flamboyat customes, but He-man’s alter ego wore full body tights and a pink shirt two sizes too small. If I could ask him anything: why the metal harness and where can I get one? The Red Guy (Cow & Chicken)

I’m a nineties kid, so the Cartoon Network evening lineup was part of my daily routine. The Red Guy always stood out to me (and everyone with a head) as really, really queer. He had a passion for playing dress up, hysterical mood swings, and an unapologetic pride of his prodigious rump. This guy is so fabulous he is the first and only nudist drag queen. Him (The Powerpuff Girls) Another member of the Cartoon Network nineties lineup, this guy is the original He-who-must-not-be-named, known more elegantly as “Him”. It takes a man of extraordinary character and confidence to look intimidating while wearing mascara, rouge, a goatee, a pink boa and thigh high hooker boots.

We could all take a lesson.

This is probably the least obvious entry in the bunch. We all grew up assuming that Fred and Daphne were together. And yet, there was something about that ascot and monk boots that just did not fit. Why didn’t Fred dump third-wheel Velma with Shaggy and Scooby every time the gang split up, and take off with Daphne to the backseat of the Mystery Machine? (and before you even insinuate “threesome”, let me tell you Velma was NOT interested). No, no, Freddie always took off with the ladies because he was actually a scaredy cat, but did not want to admit it in front of the guys. It seems his interest in Daphne was limited to coordinating their scarves. In fact, Fred was sometimes downright catty to the “danger-prone” redhead. Let me guess, I still haven’t convinced you, right? To you Freddie is just Daphne’s preppy boytoy. C’mon, don’t ruin this for me! Bugs Bunny (Looney Toons)

Some of my earliest memories involve laughing at the childish shenanigans of Bugs and gang. At this point, of course, the concept of ‘gay’ did not exist in my vocabulary but there was just something that made me want to be like Bugs Bunny. He was so suave, so masterful at twisting any situation with words alone, and so damn lucky. He certainly would not have gotten in trouble for breaking that useless vase in my living room… Anyway, Bugs Bunny taught me it was okay to kiss other boys (not just peck but big ol’ smooches) and he always looked so pretty in drag! No straight male can have a waist that tiny, or sing show tunes so well, or apply his own makeup. We really could not have asked for a better star. And as for lame beard Lola Bunny, she’s just the afterthought of too many sourpusses complaining about the rabbit’s fabulousness. Spongebob Squarepants

Where to begin? I mean it’s not just the opinion of a twenty-something guy who has nothing better to do than blog at two in the morning, but a unanimous vote. Ask the shows producers, the sea critter’s solid fan base is composed of prepubescent children and middle-aged gay men. Yes, Spongebob likes to sing, dance, giggle, and dress-up like a fairy princess. Yes, Spongebob holds hands with Patrick, stalk Squidward, and ogle Mr. Krabs. Yes, Spongebob inserts foreign object into his many orifices every chance he gets. But all that is circumstantial. What makes Spongebob gay is that gosh darn positive attitude of his; always so upbeat, so friendly, so unafraid to be himself. He revels at the fact that he is unique and never apologizes for his weirdness.

We should all be so lucky to have a little piece of yellow sponge somewhere inside us.