In this mixed up, muddled up, shook up world, finding one’s soul mate(s) is a rare treasure indeed. My boyfriend and I have been together for five years now and, in addition to sharing our lives together, we share clothes, makeup, costumes, and more. He is my best friend in the world and the fact that we share as many differences as we do similarities is what brings us closer together every day.

It should come as no surprise that Jesse and I met at The Rocky Horror Picture Show. In fact, as a child, it was seeing Dr. Frank N. Furter on my TV screen that gave me my first taste of androgyny. And, I’ll tell you something: I liked it. Unlike that of Brad and Janet, my reaction to the “Sweet Transvestite from Transsexual Transylvania” was not one of shock or alarm. I found Frank intriguing, and, as I grew into adolescence (and began regularly attending midnight Rocky Horror shows), I began to feel a sense of physical attraction to his aesthetic. One of my first and most vivid dreams of a sexual nature involved Frank N. Furter, which truly informed my path towards discovering my own orientation as queer, pansexual female.

It took me years to gain a better understanding of my world and my identity, and at 27 years old, I’m still learning. For a while, I identified as heteroflexible. With more life and sexual experience, I later began to identify as bisexual. As of recent, my understanding of the gender spectrum and rejection of the antiquated notion of the gender binary has led to my identifying as pansexual and queer. (While I try not to get too hung up on labels, it is convenient for me to have a term that – for the most part – encompasses my sexual orientation to allow for more opportunities for education and information.)

Thankfully, I have a partner who inspires and teaches me as much as I teach him. His style transcends that of traditional societal constructs and, as a result, I have become more drawn to the glam aesthetic in my personal style. I look to the styles of David Bowie, T. Rex, and the like to inspire my more adventurous “night looks”.  Sometimes, I even have Jesse pick my outfit for the evening to gain a fresh perspective. That said, it’s not all just clothes and makeup. I have come to open myself to the understanding that there is more to individual identities than that, which is encapsulated in the terms “Masculine” and “Feminine”.

I have learned that an individual does not need to be defined as falling on one side or the other of what now seems to be an arbitrary binary. For example, I used to play with “boy” toys as a child and was chided for it. I’ve seen men made fun of for being sensitive or “girly” because they are in touch with and express their emotions. Being a female with a deep voice, I have had jokes made at my expense because I don’t sound “like a woman”. I have to stop and think to myself, ‘what does that even mean?’ Why is it that society continually places the expectation upon us to wear labels, to be cornered into a tiny box, and to stay within the lines of that box? What does one have to lose by stepping outside of the box and strutting — fabulously — down a path of their own choosing? This is what Jesse and I have resolved to do as we spend our lives together, and I couldn’t be happier for it.

Some of the most fantastic moments Jesse and I have shared together have been on a stage. Both burlesque performers (as the above-pictured “Captain Androgyny” and “Leia la Voix”), we are often cast in the same shows, sometimes even getting to perform duets. One of the best things about burlesque is it allows us to be whomever we want. Gender is largely irrelevant as long as a performer is engaging and entertaining. Taking the stage as his alter-ego “Captain Androgyny”, Jesse performs both in traditional female and male-oriented routines. As a performer with the surname “La Voix” — and the first name of “Leia” — I perform mostly nerdlesque-inspired routines, sometimes even singing and stripping. Occasionally, I will delve into more classic style acts and I look to Jesse for glamor inspiration. We rehearse together, give each other tips and suggestions, and sometimes even do each other’s makeup in order to rock every stage we hit. His confidence in performance has taught me how to carry myself with more self-assurance and poise. I’ve shown him techniques for blending eye shadow and doing glitter lips. We love each other, help each other, and lift each other up, knowing that what we get out of our relationship is exponential to what we put in.

While for some, cross-dressing is a kink, for others it is a way of life. In either case, I knew that falling in love with my boyfriend meant loving and embracing every facet of him just as he does of me. His androgyny – just like my queerness – is not “a phase” or something to get over or get past. These are valuable pieces that make up the puzzle that is us. Every moment that we share together is shared knowing that we love each other unconditionally. 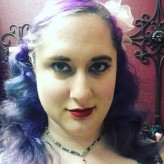 How in the Hell You Gonna Help Yourself?

The Knight and the Yellow Rose