The Knight and the Yellow Rose

“Have you ever heard of a red rose?”

The lady frowned and said, “I have, but they are extraordinarily rare – some think they do not exist.”

“But they do? They aren’t a myth?” the knight said, full of hope.

“I have not heard of one in many years.”

At this, the knight slumped. Perhaps he shouldn’t have let his hopes up. He had an unwitting tendency to climb the stiff chilly peaks of hope, to let the freshness flow through him and bring him to life like water in a wilting flower. And still the peaks would crumble and let him fall, hard, to the bottom. It was a testament to either spirit or foolishness that he could still believe when the first notes of chance’s song began.

“Why the sudden interest in a red rose?”

“My love will dance with me at the ball if I can find a red rose. As proof that our love may bloom, that it may exist at all.”

The lady nodded, and said, “When is the ball?”

“Meet me here, an hour before the ball. If I have found a red rose, I will give it to you then.”

And so the knight returned to the palace, and the lady retired to her chambers. On her way indoors, she snipped a closed rosebud from a bush of white roses. 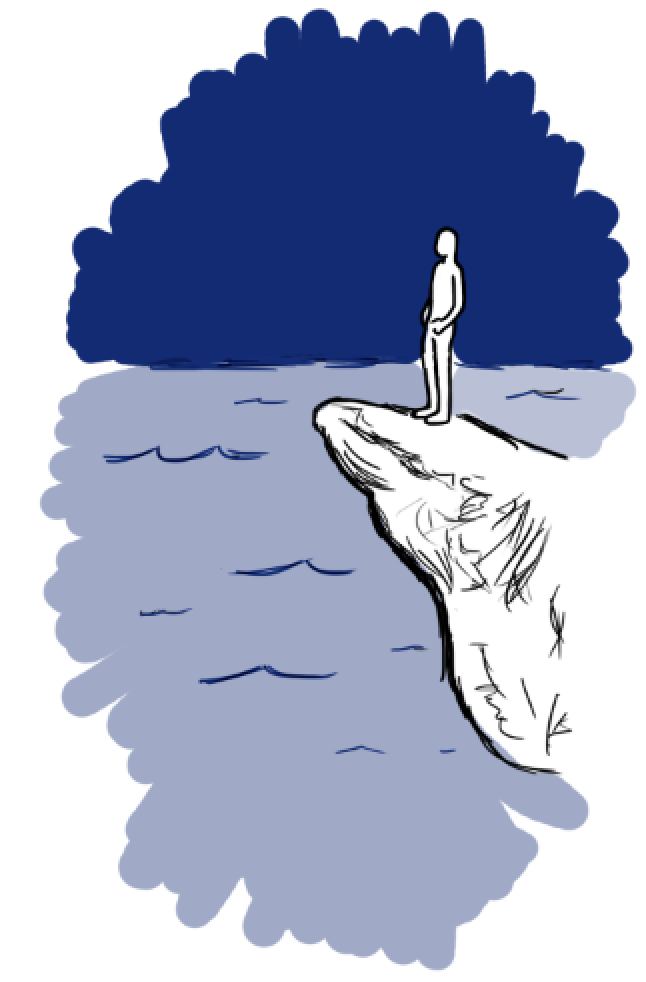 Though most only knew her as a lady, she had experience in the alchemical arts. She had long ago been told how to alter the color of a rose, and although she did not believe in love – “Because of love,” her sister said, throwing herself into the sea which her husband had drowned in – “Because of love,” her brother said, sobbing after a woman turned down his proposal of marriage – “Because of love,” her mother said, staying by her father’s side no matter how often he beat her – although she did not believe in love, which seemed more like a harmful foolishness than anything, she was willing to help her friend in his silly-but-earnest pursuit.

On the first night, she mixed a potion in her cauldron and slipped in the white rose. A red rose must be built out of music by moonlight; in the light of the moon, she took out her flute and played a light song about holding a lover’s hand, of being silly in love. She did this without really believing in love; “love” was just irrationality, in her mind. In the morning, the rose was pale pink.

The knight came back to her in the day. “Have you found the rose?” he asked her.

“It has only been one night. Have patience.” Then the lady asked, “What do you love about your love?”

The knight thought and said, “He moves with grace and governs with wisdom. His voice is kind, and his eyes sparkle when he laughs. And there is the factor which no one can explain, the glow that washes over the heart in his presence.”

The foolishness of love, the lady thought.

That night, the lady sat at her piano in silence. The song she played on the first night encompassed all she knew about love. She did not know what to play.

She looked out her window. The moon shone down coldly, accusing her of incompetence.

In the distance, she heard a nightingale in the trees across the garden. His song was complex, and constantly speeding up, then slowing; she realized he was singing of the difficulty of patience when one is in love.

She tried a few notes on the piano. Gradually, her song gained complexity and tempo. The march rhythm requested a faster song; she pulled the pace back down, but immediately it began to accelerate again. She thought of the knight’s eagerness for the rose to be finished and let it grow wild, resolving the song at its conclusion. The piano music lingered in the room. The nightingale had stopped singing, and the rose had turned a brighter pink.

In the next two nights, the nightingale returned to sing of love again. The lady listened and sang along through her musical instruments: first a wild melody on her violin, singing of the adventure of love, of the aliveness and heightened senses and vividness of the world in love; then a sleepy lullaby on her harp, of the sort of love felt from simply existing by another’s side, hearing their soft breaths, feeling their gentle lasting presence in such a way that brings about thoughts of forevers.

The knight returned again the next day, in good spirits. “He allowed me to touch him yesterday,” he said happily. “Only on the shoulder, and out of the public eye, but every romance must begin somewhere.”

“Are you sure you want to fall for a man?” the lady asked, sewing closed a hole in her alchemist’s apron. “You could have fallen in love with any lady in the country, and you chose a man?”

The knight smiled sadly, for although the lady’s question was genuine and innocent, he had thought of this himself. “It does seem more convenient at first sight,” he agreed, “to fall for a lady. But I would not be happy with a lady, and if I am happy with a man, then I hope those I care about would be happy enough in my happiness to let it be this way.”

The lady nodded, deep in thought. It was not that she wished he would love her – besides her skepticism of love, she had never loved a man. Instead, she was sad that her friend would face more challenges than most, more problems than he deserved.

Although, she thought, if he is happy, then that must be good enough for me. Who am I to be sorry for his happiness?

At night she played on the lute a troubled song. It was a song of falling in love against one’s will, of being unable to escape the pulling of the heart. Midway, the nightingale entered with a countermelody – worried still, but gentler, like the drizzling rain that comes after a storm. The lady heard a resignation, an acceptance of the heart and the song it wanted to sing.

On the sixth night, the nightingale sang a slow song. Hearing this, the lady pulled out her cello and played a song of deep, true, steadfast love. Love with an unbreakable honesty, love which exists without jealousy and lasts far longer than death. She was beginning to believe in these things, the sides of love which she and the nightingale had sung of.

By morning, the rose was pink – pink as the flush on a child’s face, pink as a sunset after the orange has faded out – too pink. Not nearly red enough. The lady worried, in part because she had not properly slept in nearly a week.

The knight visited in the afternoon and saw this. “You shouldn’t hurt yourself for my sake,” he said, worried for her health.

The lady waved him off. “You need to sleep,” the knight insisted.

At first she refused, but eventually she agreed under the condition that he wake her when he left. But her sleeping face was so peaceful and relieved, the knight broke his promise. 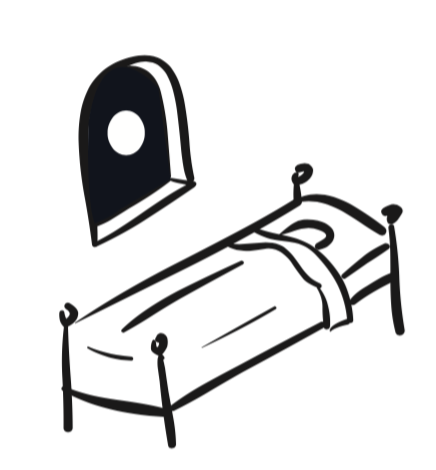 Night fell. The moon climbed, nervously peering into the room where no music played. The lady slept a restful, dreamless sleep. The rose lay at the bottom of the cauldron, its color unchanging.

In the morning, the lady awoke slowly, but when she realized it was day, she jolted awake. The sun was low on the wrong side of the sky.

From her door came a knock. “My lady, are you here?” came the knight’s voice. “It is almost time for the dance.”

Horror bubbled in her stomach. Feeling nauseous, the lady hurried to her cauldron. She looked inside and froze, stunned.

Inside lay a rich red rose – the color of rubies, cherries, a healthy heart. The leaves were a little torn, a few of the petals limp, but she held in her hands a rare, red rose. But she had not completed the procedure – how?

The knight knocked again, impatient in his nervousness. The lady pulled out the red rose and ran to the door. She showed the rose to the knight, who embraced her in his ecstasy.

As the knight left to go to the dance, the lady thought she remembered hearing music in her sleep. She listened to the distant memory; all she could make out was the song of a nightingale.

When the moon ascended the night, the air was still. The lady emptied her cauldron out the window. In the distance, the nightingale sang again, of promises kept and broken; the lady hummed a little with him.

At sunrise there was a knock. At the door was the knight, standing there in his best formal wear, disheveled from the walk from the palace. Every part of him slumped like a wilted rose.

“How was the dance?” asked the lady tentatively.

The knight shook his head. “My love gave the rose to a lady,” he said. “They danced all night.”

“Why did you stay so long?”

“To make sure they were all right.”

“Will you try and get him back?”

“He is happy with her in his arms. I would rather let him be happy – indeed, help him, if I may.”

The edge of the sun slipped over the trees. For the first time in her life, the lady saw love. It was not foolishness or pain; it was not impatience, nor adventure, nor drowsy peace. These were all side effects of love, a pure, selfless thing which stood right in front of her.

“Come inside and rest,” said the lady.

The sad knight fell asleep on her divan. The lady sat on the windowsill and thought about the nightingale’s song.

She was remembering pieces – there was an aspect of purity about them, a nature of understanding, under which worries are few. It was a requited love, as well as an innocent, unassuming one. What caught her attention was that the true, selfless nature of love was candid here.

Strange, she thought. The nightingale’s song feels like myself and the knight. Could this be love? But we would not wish to marry one another. What sort of love is that?

She looked down. Below her window, where she had drained the cauldron, a rosebush grew. No plants had grown there before. On the branches of the rose bush bloomed yellow roses more perfect than the red. 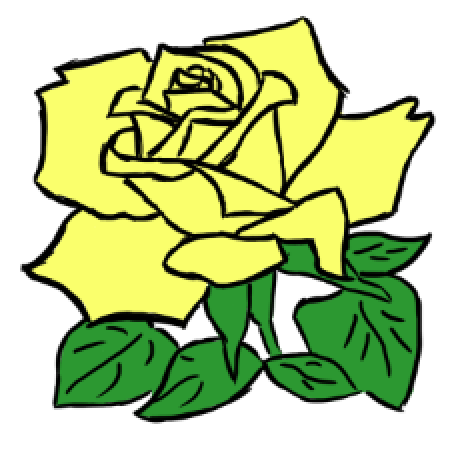 This article was featured in OutWrite’s Winter 2017 Print Edition. Contact us at [email protected] if you’re interested in receiving a copy!