What Does the Recent Supreme Court Gutting of Roe v. Wade With Texas’s Abortion Law Mean for Queer Rights?

The United States Supreme Court has long been the focal point of political battles and tensions. The failed appointment of Robert Bork under former President Ronald Reagan served as the spark for a common practice known today as “borking,” where judicial nominees are vigorously questioned on their legal principles and knowledge. At the time, Democrats feared the nomination of the conservative appointee and managed to block his chances of serving on the court. This animosity continued as the pendulum shifted left with Merrick Garland not even receiving confirmation hearings under Majority Leader Mitch McConnell’s Republican Senate in 2016.

However, conservatives did not just stop at blocking more liberal nominations from passing through the Senate. The Federalist Society emerged during those Reagan years as a way to alleviate the disparity between rising ideas of national conservatism and the appearance of more liberal law school teachings. Students and organizers ran this group as a way to advocate for an originalist approach to the judiciary, meaning a strict, direct interpretation of the Constitution that often leaves little room for social or political progress within the courts. These kinds of interpretations led to justices ruling against things like gay marriage in Obergefell v. Hodges, and abortion rights as privacy in Roe v. Wade.

The society also developed a process for lining up Supreme Court appointments under Republican presidents. They managed to limit ascendance to the court from potential outsiders, like the nominee Harriet Miers who was unknown to the society. Then President George W. Bush eventually replaced her nomination with the now Supreme Court Justice Samuel Alito, someone with whom the society was well acquainted. Even former President Donald Trump managed to gain more establishment-based conservative support for his election in exchange for his willingness to fill court seats with the recommendation of the Federalist Society, according to Congressional testimony by Senator Sheldon Whitehouse, Democrat of Rhode Island.

This overwhelming influence of the court has led to a 6-3 majority for conservative judges on the Supreme Court, and it puts key Supreme Court precedents, like Roe v. Wade, and landmark decisions involving queer rights, like Obergefell v. Hodges and Bostock v. Clayton County, in jeopardy . The overruling of such precedence has already happened. The Supreme Court, although not overtly ruling so, essentially ignored Roe v. Wade’s precedence by recently allowing a Texas law outlawing abortions for women past six weeks of pregnancy.

Allowing such a restrictive abortion ban to stay in place puts into question this conservative Supreme Court’s willingness to allow other precedents to stay in place as well. Considering this, some Texas legislators are now looking to clarify if Texas must allow same sex marriages to be recognized in light of the federal courts not striking down their seemingly unconstitutional abortion laws.

These concerns over an increasingly conservative, right-wing Supreme Court have led many progressive lawmakers, particularly House Progressives, to call on President Biden to reform or stack the court in response to Republican efforts to stack the courts with their own conservative nominees. Many progressive advocates also see President Biden’s commission on Supreme Court reform as a method to maintain the status quo, arguing that its membership of academics prevent meaningful reforms like changing the amount of Supreme Court seats from taking place, in favor of more watered-down proposals like term limits or transparent recusal processes.

Ultimately, the issue is now in the hands of President Biden and Congress. Do they view the situation with SCOTUS as too conservative? Or do they still believe they will uphold precedent and respect laws surrounding, but not limited to, queer rights and equality? The time is ticking as Biden’s approval dwindles and his control over both chambers of Congress is expected to change in the upcoming 2022 midterm elections. 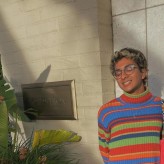 Do You Listen to girl in red? The History and Modern Usage of Signaling in the WLW Community

"We Get To Celebrate A Victory": UC-AFT's Successful Negotiation with the UC Admin