The National Center for Transgender Equality (NCTE) recently announced that the 2022 U.S. Trans Survey (also known as the USTS) is set to launch on October 19th. The USTS was created by the organization in partnership with the National Black Trans Advocacy Coalition, the [email protected] Coalition, and the National Queer Asian Pacific Islander Alliance. According to the National Center for Transgender Equality’s website, this survey “documents the lives and experiences of trans and nonbinary people ages 16+ in the U.S. and U.S. territories” and is the largest survey of trans people by trans people. It explores the trans community’s experiences with mistreatment, violence, economic hardship, physical and mental health, and discrimination, as well as amplifies the impact of growing visibility and acceptance.

The last U.S. Trans Survey was administered in 2015 with close to 28,000 respondents. In an email sent to pledgers at the end of September of this year, NCTE reported that over 30,000 trans people have pledged to take the survey on its second run. They hope to “continue to [have] the largest, most diverse sample across all identities,” including race, socioeconomic status, age, and more.

The USTS hopes to fill gaps in research about the transgender community by providing data that increases the general understanding of the community and its needs. Repeating the survey after a significant amount of time also allows researchers to learn how the experiences and challenges faced by the trans community change over time and push towards creating a more trans-inclusive future. To read the results of the 2015 U.S. Trans Survey in English or Spanish, click here.

If you are a member of the trans or nonbinary communities, please consider taking the pledge and completing the survey upon its release on October 19th. 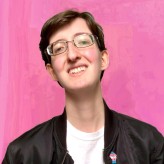 Christopher Ikonomou (Xe/He) is the Editor-In-Chief at OutWrite, as well as an illustrator on the Graphics Team. Xe is a fourth year Communication major and Disability Studies minor. He loves making art for the queer and disabled communities, watching horror movies and shows, and listening to Phoebe Bridgers.