Over on Bruinwalk on a cold February day, at least three fundraisers are taking place. Most are for Dance Marathon, an event that enlists thousands of students to raise money to fight pediatric AIDS. They’re wearing colorful shirts and sporting catchy slogans.

Meanwhile, in a coffee shop just a short walk away in Westwood, a veteran AIDS activist tells a different story.

Cat Walker was a dedicated AIDS activist who helped lead ACT UP Los Angeles from its first meeting in 1987 until the mid-1990s. Walker remembers AIDS differently from the way it is now. “AIDS was a really terrifying thing back then. The way it started in the early 80s, it was sort of mysterious – we didn’t know what it was, how people got it. There was no effective medicine for AIDS; a diagnosis was like a death sentence.” Walker saw many of his close friends contract AIDS and die just a few months later. “More and more of my friends were getting sick and starting to die,” Walker said, “I felt guilty. Why am I okay and my friends aren’t?”

The situation was desperate. Walker explains, “The government at the time acted like it didn’t care, didn’t want to do anything about it, didn’t want to invest in research. They were fairly dismissive even though thousands of people were dying.” Beyond simply ignoring the problem, some used AIDS as another reason to ostracize the gay community: Rev. Jerry Falwell famously called it “the judgment of God”, gay men “paying the price” for their lifestyles. The effects were devastating to an already marginalized community. Living as a gay man in the 80s, Walker was surrounded by people contracting AIDS. “Inside the gay world, people were just dying, and outside in the straight world people were just going on with their lives like nothing had happened. It felt like I was living through an apocalypse, like everyone’s going to get AIDS and everyone’s going to die.”

It was around then that several AIDS activist groups began to appear. In particular, Larry Kramer started ACT UP, the AIDS Coalition to Unleash Power, in New York. Walker says, “Our main goal was to get more attention, force the government to fund research and pharmaceutical companies to make affordable treatments.” Their slogan: Silence = Death. ACT UP became famous for its demonstrations; protesters would block traffic, peacefully occupy pharmaceutical company offices and participate in massive civil disobedience actions. Walker explains, “Part of what gave us notoriety was those demonstrations. Sometimes we tried to do it legally, and sometimes we planned civil disobedience and planned arrests. When people committed civil disobedience and got arrested, it got more media attention. If we just did legal demonstrations the media would ignore us, but if we blocked the street, then we’d get attention.” Even when it was negative attention, ACT UP believed that it was necessary to get the public to pay attention to the thousands of people dying without hope of treatment from AIDS.

In 1987, people in Los Angeles began discussing plans to form an ACT UP of their own. Walker joined up immediately, saying, “I felt like this was something I could do, something I could do to help my friends.” But it soon evolved into more than that. Walker devoted his life to the movement, and would go on to be arrested four times for protesting with ACT UP. He recounts one experience with a smile. “It was at a demonstration in Woodland Hills, outside a hotel where governor Wilson was speaking and he had just vetoed an important bill. LAPD grabbed me by the hair and threw me in the street and then arrested me for being in the street. ”

ACT UP’s effects were far-reaching and sweeping successes followed in the mid 90s. “Things started turning around, new drugs started coming, people that I knew that had HIV stopped dying. Not everybody [survived], but the deaths came a lot less often, so it was easier to sort of forget.”

A new era of activism

Now, much of the stigma surrounding AIDS has faded, compared to the terror of the 80s. AIDS activism is at a different place than it was before, and some of the same tactics ACT UP used in the 80s and 90s are no longer needed. ACT UP itself disappeared in the late 90s as AIDS became less mysterious and less of a pressing crisis.

However, even as there have been so many successes in AIDS research and treatment, the evolution of AIDS charities and activism has been less positive. There is a growing disconnect between the AIDS activists and those who they claim to fight for. When ACT UP held its protests, the majority of its membership was composed of HIV/AIDS victims themselves; those who were not HIV-positive were so heavily involved in the experience that they could truly claim to empathize with their suffering brothers and sisters.

The people who support AIDS activism today have good intentions, and their work does support a good cause, but what is lost is a great deal of personal investment. People who attend annual banquets and then write large checks to AIDS charities do not inspire the sweeping change ACT UP members once did. Somewhere between some so-called activists and AIDS victims, the corporate nature of the charity system has taken away the human face of the disease.

Where organizations like ACT UP have disappeared, new charities have emerged, including the Pediatric AIDS Coalition, AIDS Lifecycle, and the AIDS Healthcare Foundation. These charities have the financial backing to fund AIDS research and treatment on a scale that grassroots groups like ACT UP could never achieve, and their presence even extends to UCLA – the Pediatric AIDS Coalition raised over $450,000 from Dance Marathon this year alone. Fundraisers like this, in which thousands of students get involved with AIDS activism, are a testimony to how far we have come from the 1980s, but it also obscures certain facts: after the fundraiser is over, how many stay to finish the fight?

But the human side, the experience of suffering, loss, and strength, is still alive and vivid in spaces like Corpus, a publication dedicated to people expressing their experiences with AIDS through creative media. Flipping through the first few pages of any issue, one of the first things that becomes apparent is the very real confusion and hurt that comes with AIDS. What makes it even more incredible is the sense of rising to the challenge and struggle.

Andy Quan, editor of Corpus explains the journal as a place for “stories of shared experiences that would move us beyond statistics, that a revelatory photo or phrase might bring enlightenment at the level of spirit or soul … where we have the potential of becoming stronger through adversity and where we create passionate and positive activism, relationships, art and community.” At the same time, Quan calls Corpus a place where they are “vulnerable … to stigma and discrimination, to violence, internal and external.” Publications like Corpus remind us of the fact that even with all the progress that’s been made, AIDS is still as real and as emotional as ever.

Organizations and fundraisers like Dance Marathon contribute enormously to the progress we are making to treat HIV/AIDS. But at the same time, we must somehow connect our activism to the people who need our help. In Dance Marathon, the organizers focused on making pediatric AIDS an urgent and human issue, and listening to the testimonies of real children struggling with AIDS, it was probably the most personal experience the majority of dancers ever had with AIDS.

However, the experience is still far removed from Walker’s. “It was frightening when people were dying all around, but at the same time I felt like I was part of a movement that was changing things and moving things. I felt like I had a purpose, and I feel like people around me felt that too.” Even though AIDS itself is still the same disease, the essence of its activism has changed. The majority of activists do not attach the same depth of emotions to fighting for AIDS and in that, we have lost a crucial part of the fight. Looking back at the history of ACT UP, we simply do not care as much.

There are many things we can learn from people like Cat Walker. But the first is to get involved. If those thousands of students at Dance Marathon fulfilled the pledge they made to get involved in the fight against pediatric AIDS, perhaps the spirit of ACT UP, and the connection to those who are most in need, will not be lost. 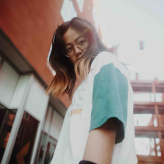 Seeing With A New Spectrum: A Conversation about UCLA's Vital LGBTQ Space