How to Get Away with Murder Speed Recap: It’s About Frank

Since this episode revolves around Frank, we learn quite a bit about his backstory. We learn that he was imprisoned at 13 for killing his dad, but Sam Keating tries to get him released. Frank has a tendency to punch prison officers to stay in prison, but Sam believes that he truly wants to get out. Although Annalise was skeptical to help Frank at first, she eventually agrees to. At first she tells Frank that he has to confess to his crime for her to help him, but later she actually bothers to review his case with him.

At the beginning of the episode, Bonnie sees Frank outside the funeral home and gives him a hug and says thank you – presumably for killing her abusive father. They head to a crusty motel and Bonnie lowkey interrogates Frank about his actions, but he explains.

While Bonnie is in the shower, her phone rings and Frank hands Bonnie the phone and tells her that Annalise called her – at this point things the sexual tension was getting a little steamy between the two. She steps out of the shower and tries to convince Frank to come back to Philadelphia with her while Frank is trying to get Bonnie to run away with him.

They both fall asleep, but when Frank awakes with a nightmare about his past, they cuddle and start a steamy makeout session. In the morning, Bonnie heads out early to grab coffee for them, but when she comes back, Frank is gone. Bonnie then starts bawling on the floor.

In the law office

The Keating 5 spend most of their time this episode in the law office actually studying for once. Wes tells the gang that he’s having dinner with Meggy and her dad while Simon is makes fun of how Annalise is suspended and the K5 can’t run to their “mommy.”

Later on, Simon joyfully reads an email aloud stating that Annalise is no longer in charge of the law clinic. Mikayla is hella pressed so she steals his laptop for an arbitration plan and when he realizes that it’s gone, he freaks out. He confronts the K5, calling them spoiled. Mikayla goes off on him, yelling at him to back off.

Wes texts Laurel to meet in the stairwell and implies that he’s going to break up with Meggy so they can get together. After talking about Meggy and Frank being “gone” from their lives, Laurel tells Wes that Frank isn’t exactly “gone”.

In the episode, we also learn a lot about Annalise.

Annalise tries to get her license back by going to an Alcoholic Anonymous meeting. At the meeting, she sees Soraya, the dean of Middleton University, and confronts her about the replacement professor. Soraya firmly backs her decision by saying that the board suspended Annalise for a reason.

Annalise gets home and decides that she’s going to get her life together by throwing away her countless bottles of alcohol. However, when she nicks herself while shaving she gets triggered by the blood, because it reminds her of her miscarriage. She then remembers all her incidences with Sam and starts downing bottles of hard liquor.

A few hours later, Wes knocks on the door and a stumbling Annalise answers it. He tries to take care of her and she asks him why he’s taking care of her if he hates her. He responds by telling her that she protects him so he is trying to do the same.

The next day, the Keating 5 tells Annalise that Simon was the one behind the slander posters. She tells them she’s not going to do anything about it, but in reality she heads over to Simon’s apartment and furiously barges in, threatening him with expulsion. Simon asks her what she wants from him and she tells him that’s up to him – he hands over the arbitration plan to the K5.

Annalise hands Soraya a document in her office, claiming that she is suing the school for 50 million dollars unless she gets a reverse on her suspension. Soraya is afraid of the bad press the university might get and tells Annalise that she’ll start making calls.

Later on that night, Annalise finds Wes and Laurel outside her door and they tell her that Frank is in Coalport with Bonnie, while also confronting Annalise about sending a hitman to kill Frank. At the perfect timing, Bonnie says, “Laurel?” right behind Wes and Laurel and the scene cuts to the flashforward.

In the flashforward, we see Laurel with the ultrasound jelly on her belly. Meggy talks to Oliver and Bonnie about Laurel’s situation and how the doctors are worried about the smoke inhalation.

Then, Bonnie steps away and calls someone, telling them that Laurel is pregnant. Meanwhile, Oliver calls Connor, but he doesn’t pick up. He calls again, and this time Mikayla’s mom picks up and Mikayla quickly grabs the phone away and Oliver updates her on everything.

The Camera then pans to the TV in the hospital with the news headline “unidentified male dead in house fire”. IS THE PERSON THAT DIED CONNOR, OR IS THAT TOO OBVIOUS? Is Laurel going to survive? And who’s the father?

Find out by catching next week’s episode of How to Get Away With Murder on at Thursdays, 10/9 central! 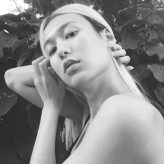