Hey Qweens! Thank god this episode starts with a read of Charlie Hides’ god fucking awful lip sync, because that was probably the worst lip sync effort I have ever seen on RPDR. Why’d she do that? I can only imagine what was going through Ru’s head while she had to sit through the entire unedited version of that performance. Like girl, we know you’re 60 or something, but so is Ru…

Antyways…THE MINI CHALLENGES ARE BACK!!!! My friends and I realized that they were probably not doing them because there were way too many fucking queens–but here we are! Back again (thank gawd). This week, the queens were asked to get into quick-drag beachwear and take a selfie with the Pit Crew. Highlights included Cynthia making all the Pit Crew members to touch her cucu (big surprise there) and Valentina being adorable and asking to be presented as Miss Venezuela. However, none of that was apparently relevant because Ru chose boring-ass Alexis Michelle as the winner.

For the main challenge, the queens were tasked with performing in Kardashian: The Musical, written and directed by Todrick Hall (of-fucking-course).

The winner of the mini challenge, Alexis Michelle, was in charge of assigning the roles. After the queens listened to the tracks and read through the script, Alexis decided to put her Broadway Experise to work, assigning all the queens as she saw fit, instead of asking them which roles they felt would work best. Some queens were happy with their roles, and some less-so, specifically Peppermint and Nina Bo’nina Brown who were cast as Britney Spears and Khloé Kardashian, respectively. Peppermint decided to make the most of the role, whereas Nina decided to throw a hissy fit for the entire episode about how she wanted to be cast as Blac Chyna (a role given to Shea Couleé), claiming that this was all a ploy by Alexis Michelle to send her home.

Soon, the queens got to work memorizing their lines and getting into character before their mainstage rehearsal with Todrick. While working with Shea, Eureka revealed that during the cheerleading episode she injured her knee (@VH1 I TOLD Y’ALL THIS CHALLENGE WAS A BAD IDEA!!!! I FUCKING CALLED IT!!!! STILL MAD ABOUT IT), but that she worked so hard to get on the show that she’s wouldn’t to let it get in the way of her performance. Good for you Eureka! Wish you could give Nina some of that optimism but….

The queens then headed to the mainstage to rehearse choreo with Todrick.  Shea TURNED IT OUT as Blac Chyna, much to Nina’s dismay, and left Todrick with high expectations for the performance. Nina…not so much, as she proved difficult to work with, talking back to Todrick when he would try to critique her. Also special shout out to Valentina for bearing with Farrah Moan’s inability to play slide and looking evidently uncomfortable when Todrick critiqued them both for Farrah’s mistakes.

The next day, the queens had a lil heart to heart after Eureka hobbled over to Sasha and Valentina to apologize about being disrespectful while they were trying to open up about their personal struggles with eating disorders the previous week. You go Eureka again!!!! Or are you just doing all this to go for Miss Congeniality??? Hmmm…

Sasha, Valentina, and Shea opened up about their own struggles with anorexia and bulimia, highlighting the harsh body standards in the gay community, which are often forgotten. Society predominantly focuses on women’s struggles with unrealistic beauty standards, so I was thankful that this episode brought to light the reality of male body shaming and body insecurities (good job VH1…you did something right!).

“Sometimes people don’t understand that though we come across as these really strong beautiful creatures, we’re sometimes really struggling underneath” -Shea Couleé

Highlights, or at least my highlights, of this week’s “Fun Fur” (which is faux fur) runway included Sasha Velour, who strut down the catwalk servin up some Bolshevick realness, paying homage to her real Russian background (Katya, I’m lookin’ at you), and Shea Couleé, who was giving us a neon Jeremy Scott avant garde fantasy. 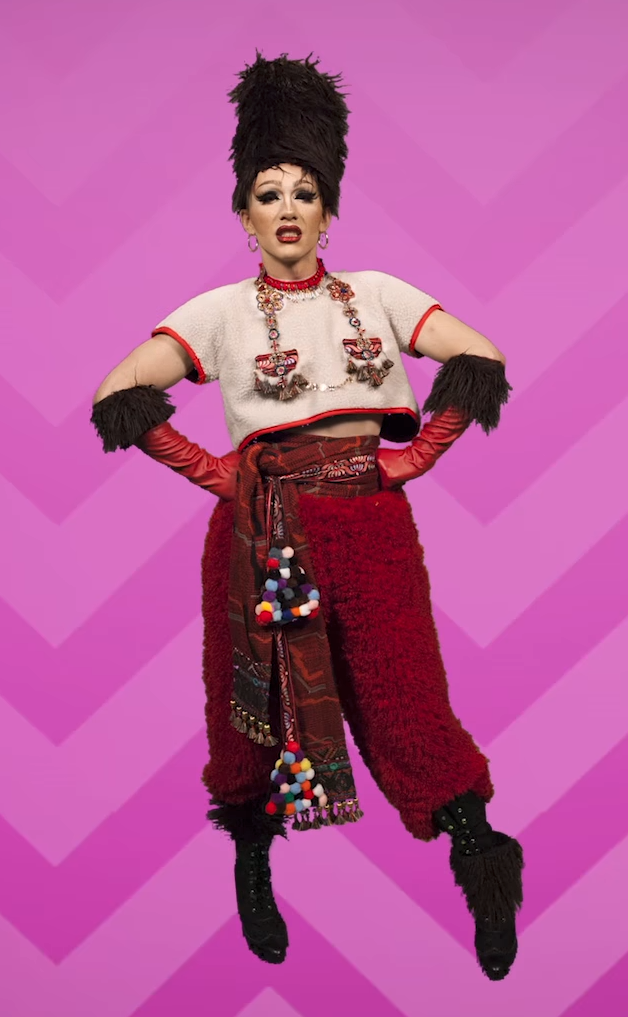 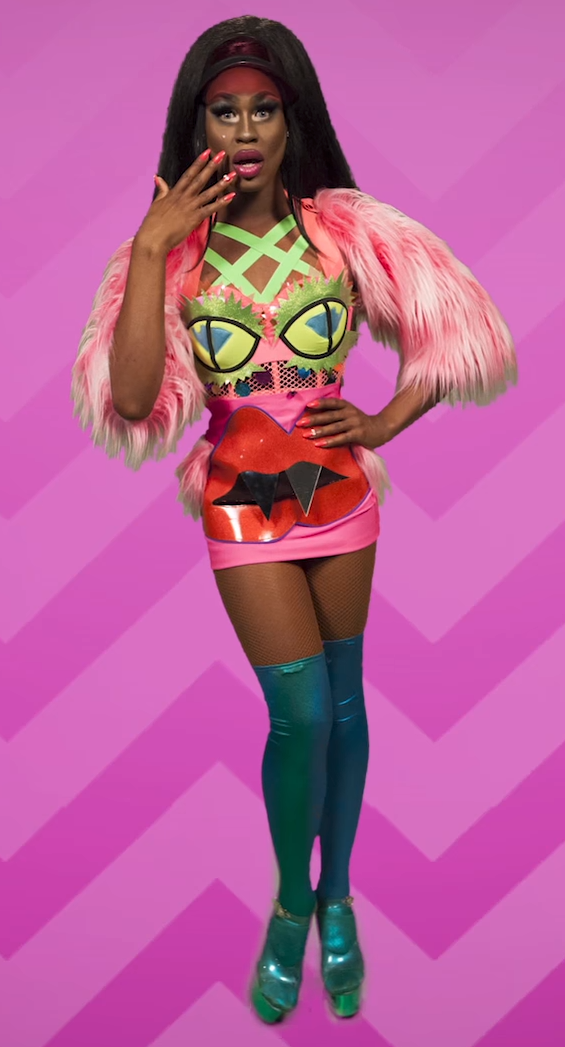 In the end, Shea Couleé’s performance as Blac Chyna and her sickening runway granted her the win for the week (yay!). This earned her the title as the First Queen To Win 2 Challenges This Season aaaand a fucking Caribbean cruise for two (not sponsored by Al and Chuck Travel tho…where they at?). The critiques were pretty dramatic for those in the bottom (Nina, Cynthia, Farrah), and many tears were shed. However, one thing that never got critiqued that I think NEEDS attention was Peppermint’s fucking god awful padding for her Britney costume. Like girl, you’ve been doing drag for how long and you still can’t make your own fucking padding that doesn’t look like you just strapped two giant hams on your legs? Really queen?

The episode came to a DRAMATIC finish, with Farrah Moan and Cynthia Lee in the bottom for their lackluster portrayals of Kylie “The Lips” Kardashian, and Kim “the fucking main act of the entire musical how did you fuck this up so badly Cynthia”Kardashian. After a mediocre lipsync, Ru revealed that despite being safe, Eureka would be going home, as the doctors said that she needed time for her knee to heal, BUT that she’s got an open invitation for the next season. I’m excited to see what she’ll bring to Season 10, as she’s already had a nice redemption-of-character arc (see: last episode versus this epsisode)! Aaaand if a quarter season of experience was enough to allow Cynthia to make it this far in the competition, I’m sure Eureka will come back kicking, that is, if her knee ever heals.

That’s it for this week, tune in Friday nights on VH1 on TV (or LogoTV online) to catch RuPaul’s Drag Race, and remember…

Liana Kindler is a 4th year psychobio major who’s spent more time watching trashy RPDR behind-the-scenes extra videos than she’s ever spent studying for class, except for that one LGBTS class that was literally about drag race (shout out to Professor Williford). She spends her time primarily scrolling deep in the RPDR subreddit during the hours that most people are asleep, and sleeping during the hours most people are awake.