An Exploration of Lesbian Communication: An Analysis of Speaking in Tongue (Fall 2000)

*This article is a modern analysis of the themes and content of “Speaking in Tongue” (Fall 2000), the third installment of our From The Archive series.*

There is no doubt that living in a cisheteronormative society is filled with a myriad of challenges for queer people. It can be scary and unsafe to live as your most authentic self in environments that are unaccepting of the LGBTQ+ community. Nevertheless, queer people have always existed and found special, discrete ways to communicate with each other that is unknown to the outside world.

In an article published in Fall 2000, titled “Speaking in Tongue,” the author Sappho Sammy explores the “Lezzie Lexicon 101,” or the Lesbian Code system filled with terms used by lesbians or WLW to secretly identify each other and discuss gay topics in public. Ranging from terms like D.D. (D*ke-drama), gay-dar, to U-Haul, the article reflects on past terms that have disappeared from our present-day vocabulary and those we hear on a daily basis.

Language is a powerful tool for connection amidst chaos. Since heteronormativity is so prevalent in society, queer women are regulary assumed to be straight which may lead to feeling less seen or valid in their identites. Therefore, creating words that other WLW are aware of has been a way to build community and bond through shared experiences and a little humor along the way.

For decades, queer women have notoriously found each other online through social media, dating apps, gaming, etc. While online interaction is great and often leads to beautiful relationships (platonic or romantic), in-person connection is ideal to truly experience the depth of another human and become friends or lovers. Unfortunately, finding other WLW in the real world can feel impossible, especially when you are in the closet or live in an unaccepting area. Nevertheless, creating codewords that signal one’s queerness can be a safe and fun way to connect and communicate with WLW as an expression of pride.

In recent years, the lesbian community has created a unique culture to communicate their sexualities through things ranging from clothing, music, to zodiac signs. Wearing a flannel shirt or cuffing one’s jeans is no longer meaningless, it can be used as a way to signify to other people that they’re lesbian or queer.

Since gender is a social construct, sociologists argue that gender is something that we do or perform. This also relates to sexuality; we perform the roles of a lesbian by dressing, speaking, and fulfilling lesbian stereotypes as a means of being perceived as queer by others. We become everything a lesbian is supposed to be based on societal expectations.

When lesbians claim that they have an excellent “gay-dar,” this ultimately reflects their ability to analyze the sexuality of others and determine who performs lesbian stereotypes most accurately, which can be invasive and limiting.

This can be harmful to members of the lesbian community who don’t perfectly fit the stereotypes or conform to societal norms. When queer women are not being “explicitly” lesbian by wearing ten rings on their fingers, pulling a U-Haul move with their new partner, or listening to Girl in Red, their identity is often invalidated by others. For instance, femme lesbians are often considered “straight-passing” and ostracized from the community for “not being queer enough.”

Nevertheless, it is imperative to understand that we don’t owe our sexuality to anyone.

While participating in lesbian culture is fun and makes us feel apart of the queer community, it can simulaneously be toxic and limit our potential to thrive as our most authentic selves beyond the confines of stereotypes. 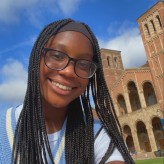 My name is Laila Marie (she/her) and I am a first-year sociology major. I am interested in writing as a form of expression, social justice, and as an outlet to make people feel seen, heard, and less alone on this crazy, but beautiful life journey.

Isabel Fall: Casualty in the Fight for Good Representation

An Interview with Rio Romeo: Love, Valentine's Day, and What It Means To Be An Artist